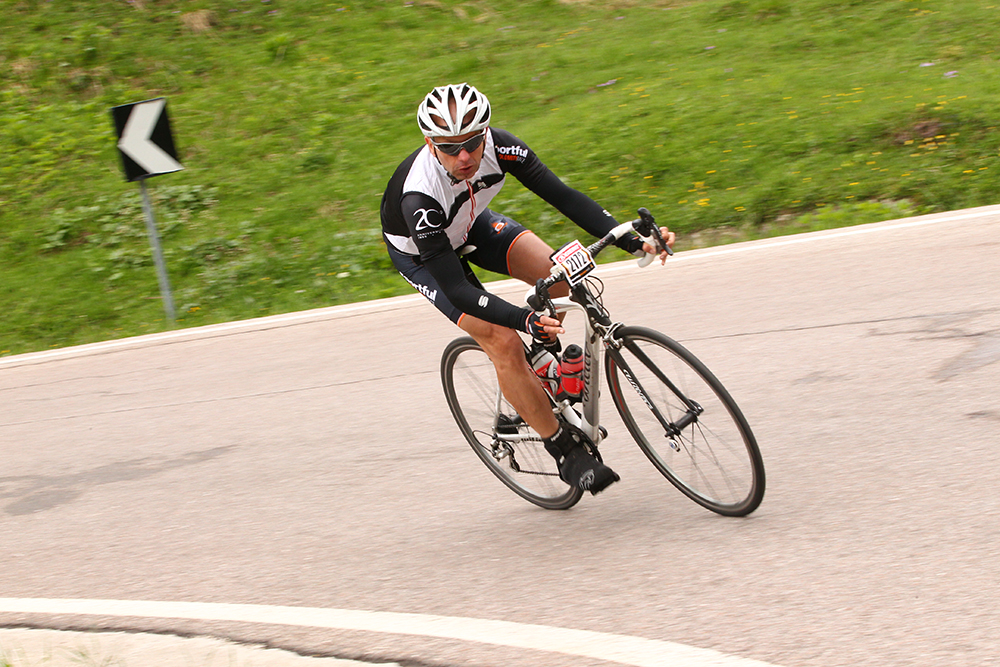 After this special year, the hunger is greater than ever to ride beautiful gran fondo's again. Often people are looking for events with nice climbs, but descending is also part of it. We give you 10 tips for gran fondos that have a cool descent. Plus one extra for free.

This gran fondo has several long and shorter descents. Especially the one of the Flüela Pass is really worth it. By the way, it is only in the long distance. It goes in the direction of Davos and there are hardly any significant bends. It takes no effort to stay on the right side of the road and let the speed increase.

Whoever rode the Marmotte knows, the descent of the Glandon has been neutralised. Quite rightly so! The second long descent is from the Galibier. Until the Lautaret it is winding and technical, but after that a long and easy road awaits. Moreover, in recent years it has been closed to oncoming traffic. Don't expect extreme speeds here, but because it is wide and there are hardly any sharp bends, you'll be going down full speed for a long time. Really enjoyable.

The Flexen Pass is a very special descent - a must do! The first part boasts a kilometre long chain of galleries and tunnels. This really is a unique experience. However, it is twisty, you can't let go. Afterwards, you turn right and you come to the descent of the Arlberg Pass. After a few hairpin bends you come to a lovely long straight stretch where the speeds are good. 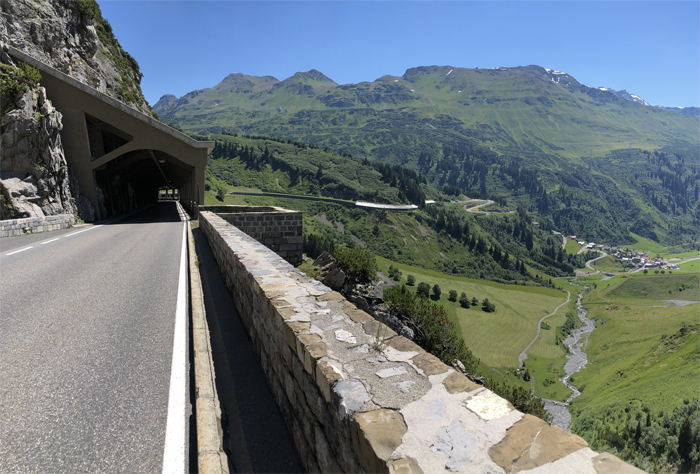 Riders of the long route have the privilege of descending the Maloja Pass. It is really super. At the top it is winding and the view of the valley is breathtaking. Perfect road surface ensures that you can turn and turn wonderfully. Then the road becomes straighter and it's downhill for dozens of kilometres to the Italian town of Chiavenna.

The Velomediane in the Belgian Ardennes is a heavy gran fondo with many short climbs. The last climb is notorious. After the super steep Côte de Beffe you climb for kilometres in the direction of Samree; one of the highest points in Belgium. Whoever has achieved this knows: now all you have to do is go down. Seven kilometres of descending to the finish in La Roche and Ardenne. Not extremely steep, but one where you can release the brakes. Sometimes you have to pedal or briefly squeeze the brakes, but for everyone it's a pleasure to float down here.

Certainly not all descents are good for a smooth descent. In the beginning the course is too busy. The descent of the Passo Giau is extremely technical. Here it's all about sterring skills and braking in time. However, the last great descent of the Passo Valparola is a feast for enthusiasts. Certainly technical, but it also contains some super fast parts.

The Tourmalet is not only the most frequently climbed col the Tour, also the descent is super cool. During the Marmotte Granfondo Pyrénées you do both sides. In the morning the east side. This goes very fast and you reach speeds of well over 80 km/h. Despite some galleries it is not very difficult. But be careful, because there are still a lot of people on the track at that moment. Moreover, it is not free of traffic.

Hours later you can descend this famous col again, this time towards the west. Less steep, but really very easy. Only once in a while a few bends break the rhythm. For the rest you can let your bike roll. Load up for that oh so heavy final climb that is waiting for you.

The Passo Rolle is the third climb of the gran fondo. The descent counts no less than 39 kilometres. It is not car-free so you have to stay to the right. But that is not very difficult anywhere. At the top, it is technical, but clear. Then follows a super fast stretch where you can release the brakes. This really is a fabulous descent. After Fiera di Primiero there is another 17 kilometres of false flat downhill. Those who are in a group here have the time of their lives. Through the valley with some tunnels you really bang down.

No matter which distance you choose, the Alpenbrevet is a series of beautiful climbs and cool descents. All distances are over the Nufenenpass. The road to Airolo is a special one. The road surface consists of concrete slabs, but they are so well laid that they do not bother you. After some fast bends at the top, you finally arrive at a straight adrenaline rush where speeds of up to 90 km/h are possible.

The long distance six laps of 25 kilometres over the Nürburgring; a car circuit with enormous height differences. During one lap you go down several times, but the descent of the Fuchsröhre is the crowning glory. Anyone who dares to let go of the brakes here will have an adrenaline rush. Due to a crash, my own participation only lasted a lap and a half, but nevertheless Strava indicated that I would have tapped 112 km/h here. I don't know if it was really true, but it was an adrenaline rush. And whoever drives the longest route comes here six times!

If you really want to go fast, there is only one gran fondo: the Ötztaler Radmarathon. This has no less than two super-fast descents. First the Kühtai. In my opinion there is no faster descent to be found. On the long straight road you can reach speeds of between 70 and 90 km/h for minutes. It almost only goes straight and during the gran fondo the road is free of car traffic. Just before the village of Gries im Sellrain the throttle really opens. Here you can just tap the 3 numbers. The street segment is not called Kühtai speed trap for nothing.

The Timmelsjoch in the direction of Sölden is the last descent of the day. A few kilometres after the pass you see the road right in front of you. Those who dare to let go of the brakes will reach 100 km/hour here. Be careful, because the cows don't care about anything and can cross the road just like that.

Important! This article is not intended to promote irresponsible cycling behaviour. Descending is cool, but returning safely is much cooler! Our advice is: stay careful at all times, never take unnecessary risks and never ride faster than you think is responsible. Your health comes first. 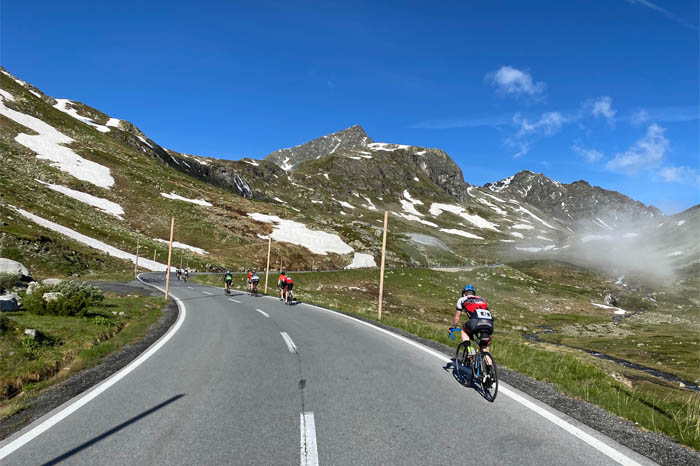 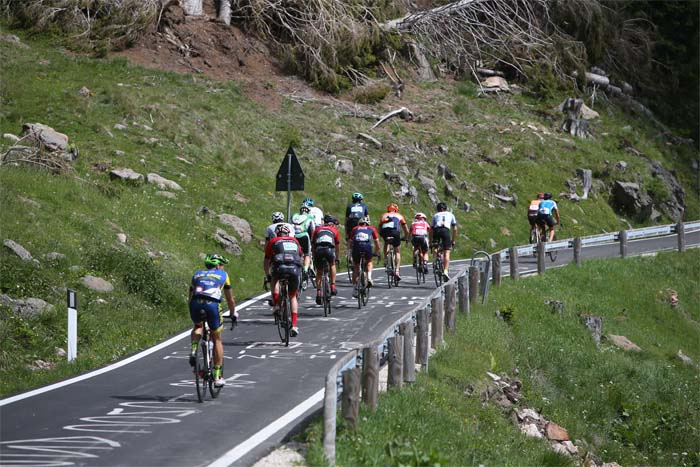 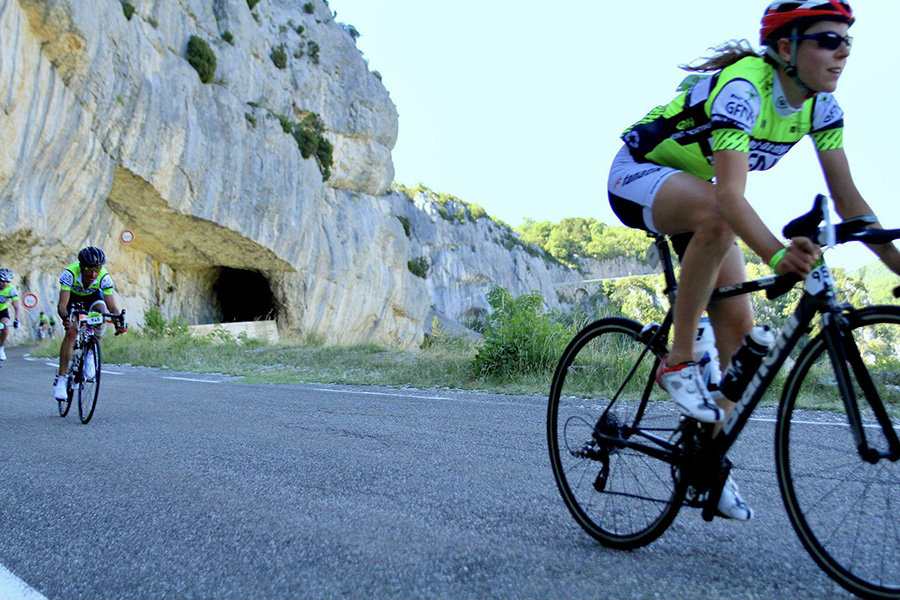