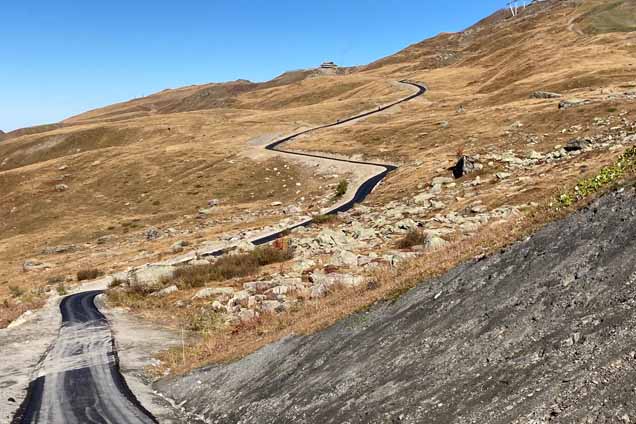 Everything about the new Col de la Tougnète (with video)

Earlier, CycloWorld reported that the follow-up climb of the Col de la Loze is now under construction. The side that starts from Les Menuires has now been completed to the summit. Locals are already riding up. CycloWorld reader and local Robert Karreman explored the climb on foot exclusively for CycloWorld. Thanks to the large amount of information provided for him, we can now answer the most important 5 questions.

The start of the bike path is in Les Menuires, next to the Village des Pioupiou and the tower block, at an altitude of 1820 meters. 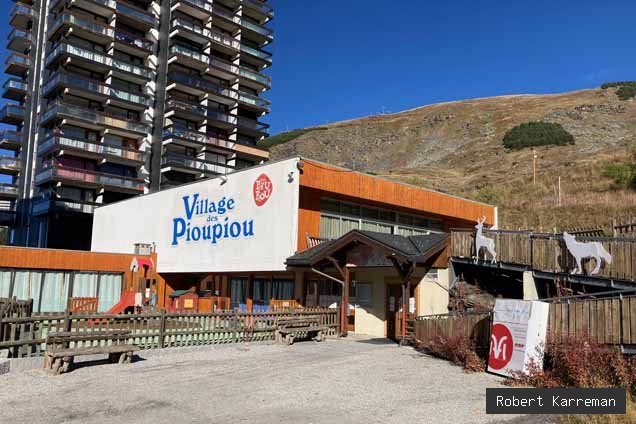 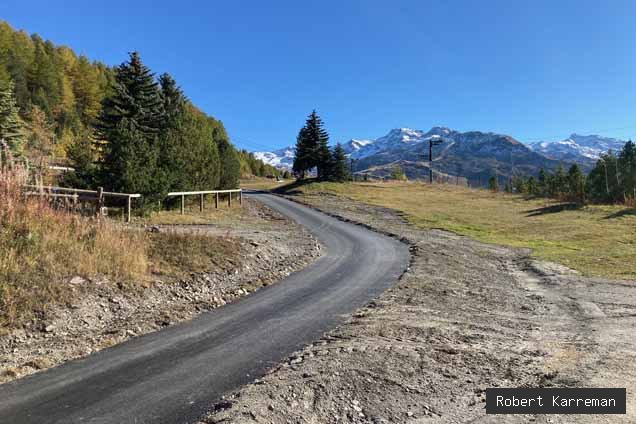 After an initial hairpin turn, we head up along the Croisette of Les Menuires toward the iconic Le Brelin apartment building. Just before this building, the trail takes a right angle turn and we begin to gain good altitude. 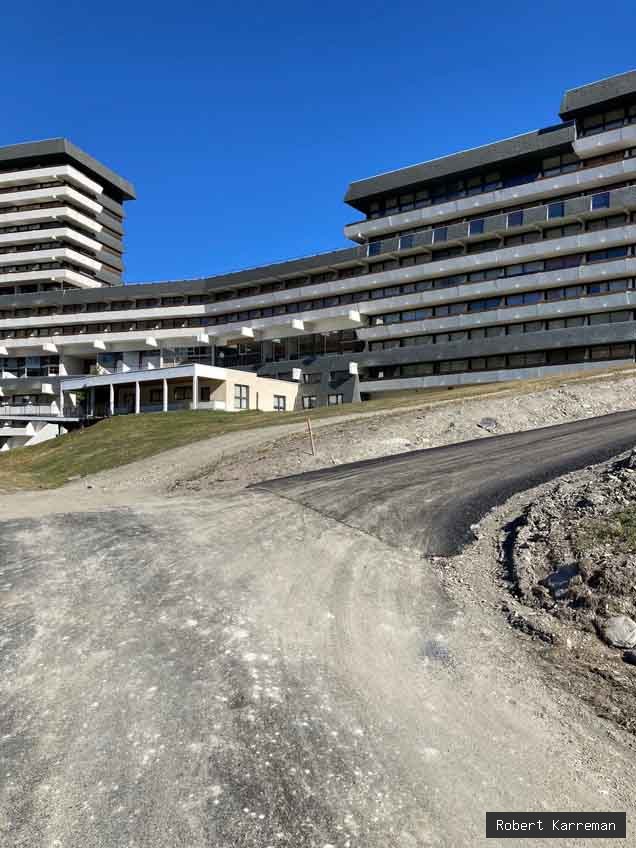 We drive along the back of Le Brelin and then in a short time we have bridged almost 100 meters of elevation. If you look over your left shoulder, you have the following view. 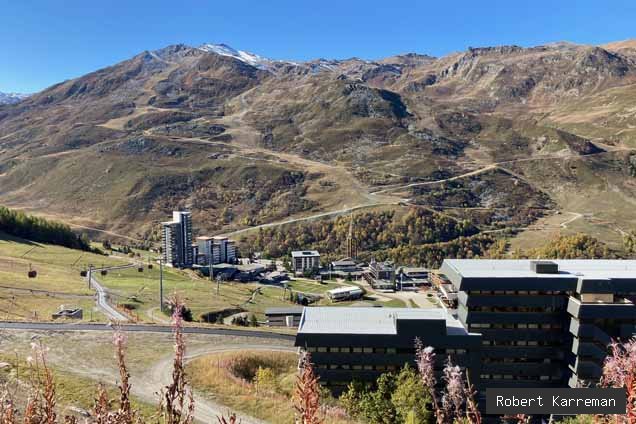 From here we go up in a nice evenly ascending course. 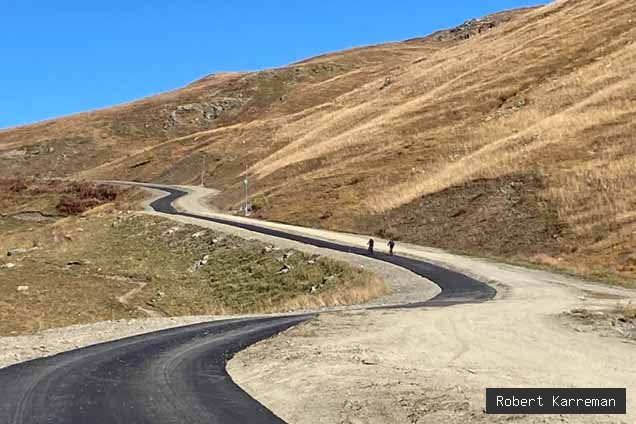 Until we arrive at the restaurant Le Grand Lac at about 2250 meters, from where there is a view of the most challenging part of the trail: the climb to the Tougnète (2390m), via the restaurant Maya Altitude (2340m). 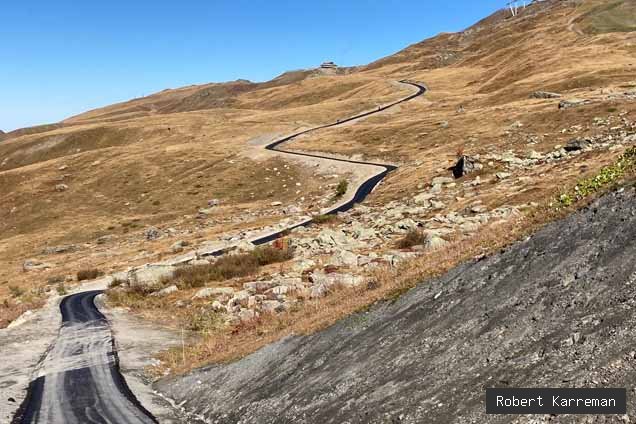 After the restaurant there is a short descent, followed by a rolling trail before the short steep climb to 2390m must be started. The first part of the climb brings us to the Maya Altitude restaurant at 2340m (and where later the connection to the bike path from Meribel will be). 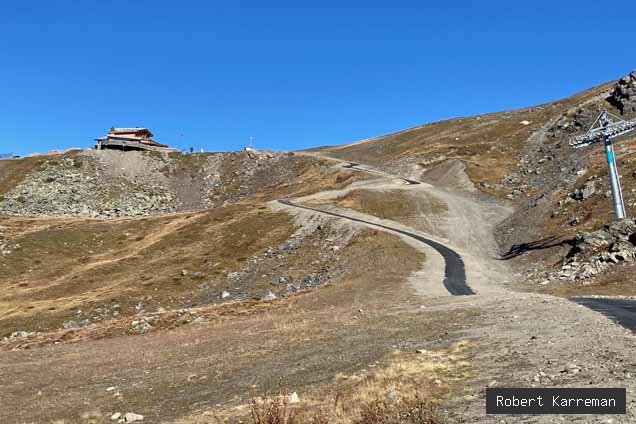 Once this challenge is conquered, a beautiful view of Meribel and Mont Blanc awaits... 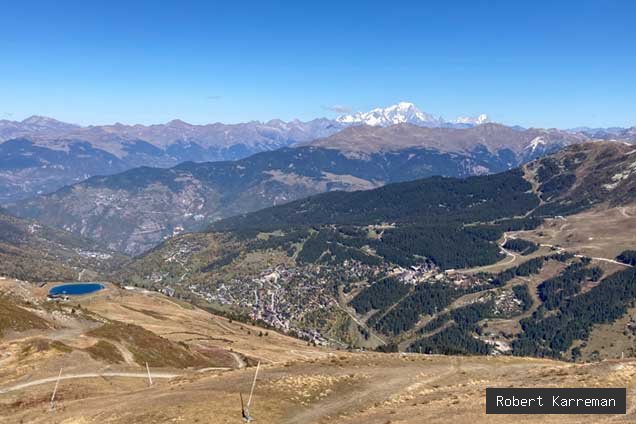 From here, the trail continues up to Tougnète (at an altitude of 2390m), where the chairlifts from Saint Martin de Belleville and Meribel-Mottaret also arrive. If we then look back, we have the following view.... 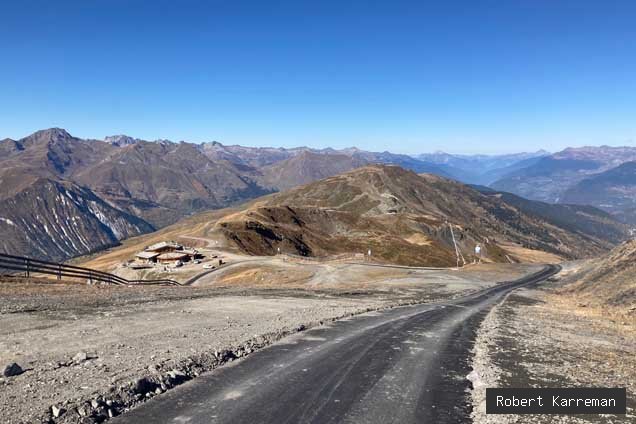 The route on Strava (click on the image to open the route). 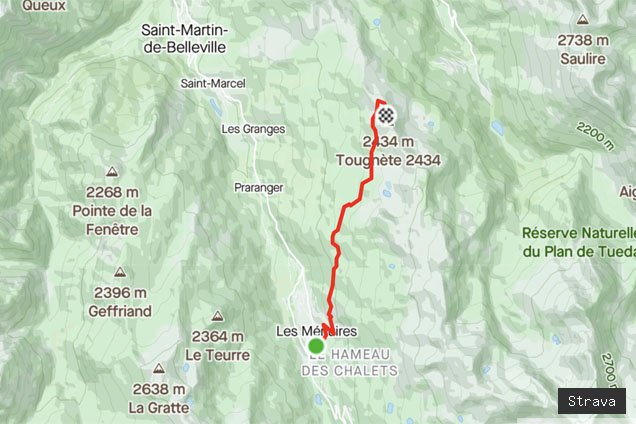 Based on the data provided by Robert, our partner Climbfinder has created a provisional profile. The profile will have to be perfected by repeat measurements, but it already gives a good view.

In addition, it should be mentioned that the foot in Les Menuires lies at over 1800m. To get here you first have to ride 27 kilometers from Moûtiers, of which 22 kilometers are climbing. You overcome therefore already 1350m+, before the heavy climb to the Tougnète begins. The total climb from Moûtiers is 34 km with 1900m+. Truly an beast of a climb. The road thus runs from Les Menuires to the Sommet Tougnète (2434m). This is the heart of Les 3 Vallées, the largest ski area in the world. A number of ski lifts also end at the summit and just below it is the Maya Altitude restaurant. At this restaurant there is a sharp right turn to get to the highest point which is no more than 100 meters away. The road stops at 2390m, just a little lower than where the ski lifts end.

It is planned that in the future the road will be accessible from Méribel-Motteret, presumably via the Pas de Cherferie. Click on the map to see the whole area.... Officially nothing is known about this yet, at the moment people use the name Tougnète or La Tougnète. But we put our money on Col de la Tougnète. Officially, the road is not a col, because according to the definition, it is the lowest point between two mountains. The Tougnète, however, is a mountain peak. Whether the French will call it a col remains to be seen. After all, the word 'col' makes the hearts of cyclists beat faster.

There are reportedly two routes from which to choose. Which ones they are is unknown, but based on the situation, there are some to consider.

We cross that option off.

We will have to be patient for a while. It is planned that the Méribel - Tougnète section will be built in the summer of 2022. This will create a connection between Les Menuires and Courchevel that for the most part is only accessible to cyclists. This Via 3 Vallées goes over two cols namely the Tougnète and Col de Loze. The latter climb is already confirmed for the Tour of 2023. Whether the riders will climb the Col de Tougnète? Time will tell.

But that's not all

There are indications that the Col de la Tougnète is not the end of the Via 3 Valleés plan. There are rumors about bike path to Val Thorens. Currently, Les Menuires and Val Thorens are connected via the D117, but mysterious asphalt work has begun in Les Menuires that may indicate a connection to Val Tho. It is mentioned in this old newspaper report from 2019, but whether it will actually happen, we won't know until next year.

With very many thanks to Robert Karreman.