I had heard and read a lot about the legendary BIKE Transalp. This stage race for the MTB had been on my wish list for a long time. In January, a cycling buddy called me and asked if I wanted to join him as his teammate. After 2 years of not making any plans because of covid I didn't have to think anymore. It was now or never again! 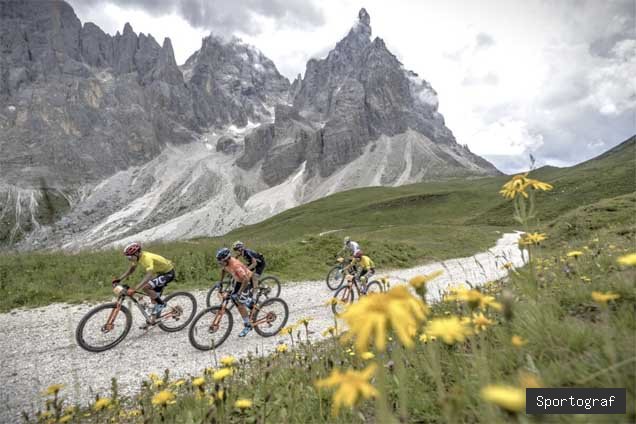 I have a pretty good basic condition because I often ride longer distances on my MTB so an average stage of 80km with 3000m+ was something I could handle at first. Until I realized that it had to be done 7 days in a row.... That meant a lot of extra training.

Looking back, the Tour's slogan "Live your dream" more than justified. In 1 week time I've seen so many different beautiful impressions, beautiful trails, nature and landscapes. A wonderful adventure with like-minded people from all over the world. There were more than 40 nationalities participating!

The entire event is tremendously well organized. The entire organization of traffic controllers, medical care, feed stations, luggage transport, routes and food is perfectly done. After you've checked in and found your way, you only have to worry about cycling and enjoy it to the max!

For the overnight stays, there are several options. You can book hotels on your own at each finish/start location. You can also outsource this to the organization. In both cases the organization of the Transalp will take care of luggage transport. When you register and pick up your start package you will receive a large bag for this purpose.

We ourselves have chosen the TransCAMP option. It is a sober accommodation at a very favorable rate including breakfast buffet. You sleep on your own air mattress in a gym or school building near the start and finish. In the beginning it took some getting used to to sleep with 150 people in a large gymnasium. It is less luxurious and comfortable than a hotel room. But the interaction with the 150 other participants makes it so much better and more intense. The first day I walked into the dormitory a little pale and uncomfortable. While after a couple of days you fraternize with all of them to 1 big international family that experiences the same big adventure. Transalp also provides a laundry service. After 2 hours you can pick up your clean laundry wet again. Personally, like many other Transcampers, I chose to just stand with clothes in the shower and wash your clothes and yourself there. Then you get creative to use anything around the building to let your laundry dry in the sun.... One last tip, bring a power strip. The number of power outlets is limited. It does seem to be a basic necessity to charge your phone and/or bike computer.

Besides the accommodation, bike storage and luggage transport there are several additional services which can be booked through the organization, such as a complete maintenance service for your bike and the return trip from Riva del Garda to the start location including bike and luggage.

On Saturday, July 2, we left by car towards Lienz. Already after a 1 hour drive my teammate got a call. Due to a death the adventure for him falls apart. That was emotionally a quick switch and we came to the conclusion that we had to turn around very quickly to bring my teammate home and that I would continue on my own. Although most participants ride in teams of 2, you can also start individually. After a race against the clock I arrived in Lienz where I could change my team registration to a single rider without any problems.

The first night I did not sleep very well. A little uneasy and a lot of tension. The next morning, after an excellent breakfast, we were taken by shuttle bus back to the start location Leinz. The weather was sunny with temperatures well above 30 degrees. From the start, it was pretty steep uphill right away. Once we arrived at the top, we got an amazingly beautiful section via the Peter Sagan Trail. We had just finished 20 km and I was already completely demolished. My legs were horrible. Fortunately, along the road between the two supply stations, there were residents of the various villages handing out water with garden hoses and they had pointed the garden sprinklers at the road to get some cooling. For the rest of the first day, I had nothing to do but suffer. I asked myself in despair: if this is the standard then I will have a hard time this week and maybe I underestimated it after a good preparation. After dinner and a tired first day I fall asleep like a log. At the start the sun was still shining. We had been warned that there might be rain and thunderstorms. Especially at the final climb to the Kronplatz at 2250 meters. Optimistic as I am, I didn't bring a raincoat. What a regret I had there. The trip started fantastic I felt a lot stronger and it was not so hot. By the time I had to start the climb to Kronplatz, the mountain was already covered in dark clouds. You could hear the thunderstorms coming in the distance. It started to rain and soon turned into a torrential downpour. At the second service point at 2/3 of the climb the race was stopped because the descent from Kronplatz had become too dangerous due to the bad weather. Via the paved road you had to find your way to Bruneck. Cold and soaking wet arrived at the sleeping location (an ice hockey stadium) with a hot shower. This sprint stage seemed to bring rainy weather but at the start it cleared up completely. After a long climb we arrived at the top of the Kronplatz. Via the Dragon and the Gassl trail we were confronted with two spectacular descents. This was followed by a second climb with a descent on gravel paths to St Vigil. This short stage also gave us time to relax a bit in the village. Time for a stroll around, a few errands, and sitting on a terrace.

A very long and tough stage. Again a sunny day with high temperatures. The ride started with a lot of alternation between climbing and descending. In the first descent I unfortunately had a flat tire. Quickly repaired and on we went. Meanwhile, I was the last person and the support vehicle urged me to hurry because otherwise I would not make it in time. With a half soft tire I started cycling (such a small mini pump does not really help) and began to catch up. After 10 minutes of cycling alone I could soon catch up with the first participants, a great relief. At the next aid station I could get my tire hard again with a big pump.

The first few days I deliberately spared myself thinking 'the week is still long'. My plan was to all out today. A special stage that began quietly on fairly flat roads through the valley and then via a gravel road on an old railroad track to climb evenly. Along the way we passed several tunnels. The middle part we ride along a stream to the end of the valley where it became more narrow and the stream turned into a deep gorge. After crossing a suspension bridge the real climbing began towards an impressive rock formation. After reaching the highest point, the descent towards San Martino began. The whole day the weather was beautiful. Just after I finished, the weather suddenly changed. Rain, hail, strong wind and thunder. After half an hour the sun was shining again, only to change into rain and thunder after half an hour. It remains treacherous in the mountains. The queen stage! Again, a very beautiful route. Halfway through the ride, after a long climb, there is a descent of over 20 km and 1600 meters of descent. This very nice descent went on and on it seemed endless. Then followed, after a piece of false flat with a strong headwind, the last climb full in the burning sun over asphalt which then turned into a gravel path and in the shade. The last kilometers consisted of nice technical trails with rocks and roots where the climbing and descending alternated quickly. Each evening a buffet meal was arranged at the Transcamp. But for today and tomorrow we can use our meal vouchers in the local restaurants. With a nice club we had a very good meal at the pizzeria. 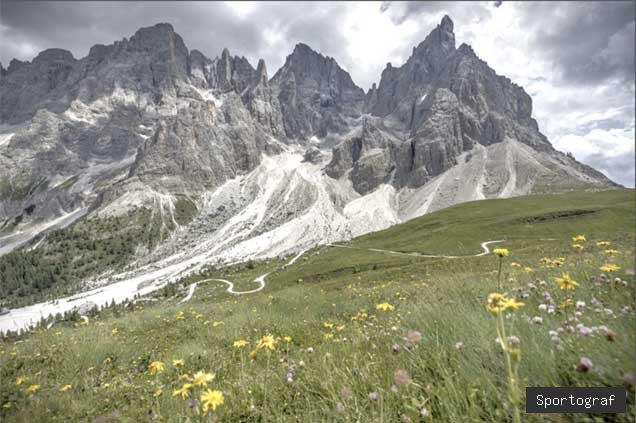 The last day. Via old military paths and past fortresses. Very nice technical descents over rocks and loose stones and tree roots. A final climb of 700hm in the blazing sun with a gradient of 18%. 17km before the finish was the stop of the official timekeeping. From there it went on together in a very pleasant way until Lake Garda came into sight for the first time. Everyone flew to the side to take a picture. The last kilometers were on the main road to Rio del Garde to experience the big finish and receive the official T-shirt and medal.

But the most important thing was that we were able to fulfill the promise we had made to each other during the week. There is only 1 thing important and that is to arrive safely in Rio Del Garde. Then we will dive into the lake and swim and drink beer on the terrace. After returning the bikes for the return trip it was party time. Getting up early the next morning to take the bus back to Lienz. End of adventure. And what an adventure! La Madeleine: an awesome day in a snake pit