It's not often that I really don't know where to start. There is so much to say about Chasing Cancellara. The wet snow. The moderately filled town square. My rather literal fall from the podium. Camaraderie. An American that I kept catching, but he never caught me. A freezing Fabian. The amazement at riding alone. Or the bizarre clothing choices that riders made. Or especially about my own course? Many stories can be told about the hunt for Cancellara in Flanders. So I'll just start the way every race starts, at the start.

The idea of Chasing Cancellara Flanders is to ride most of the route (128 or 60 kilometers) in the group you start with and time six (or five) climbs and make a classification. At 8:30 the first group starts led by Alessandro Ballan. The idea of riding in a peloton is over after the first turn. I soon find myself riding in a group of five, which also includes one Arthur. Nobody seemed to have expected the wet snow and cold, so we spend the first part of the race trying to stay warm.

At the first feed station there is hot coffee! I take one in each hand. About 10 minutes later Fabian also arrives at the post with a retinue of up to eight. He is doing his best to make social comments and to draw a smile for a selfie. I don't have time for that now, my companions are leaving again and I don't get warmer from standing still.

Next stop: De Muur! I resolve to go as fast as I can. De Muur counts for the classification, for me the main goal is to warm up, I hope. Arthur has the same idea and immediately races over the characteristic bridge. I go all out and in his wheel and rake along with him. To our horror, we only see the sign for the start of the timekeeping at the point where it gets really steep (after the Chapel Wall). I'm already at my limit by then, but yes, I also want to see where I can end up. During the longer descent of De Muur it still turns out to be cold and down below I too am clattering. I have never ridden so slowly over the cobblestones of the Haaghoek, but the pleasure was enormous. The shaking provided a massage that got my blood flowing again. I first started to feel my forearms and later my hands, fingers and feet again.

On the segments it turned out Arthur was really going for the classification. The result was - but I didn't know that at the time - that Arthur set the 2nd time on both the Kanarieberg and the Taaienberg. I turned out afterwards to be 10th and 9th. However, I was at such a huge way from Arthur that I put a good classification out of my mind. If he drops me like that, I'm sure there are many more spread out over the course. The Koppenberg, same story. Arthur gets away and becomes 5th, I'm on a big gap 16th. 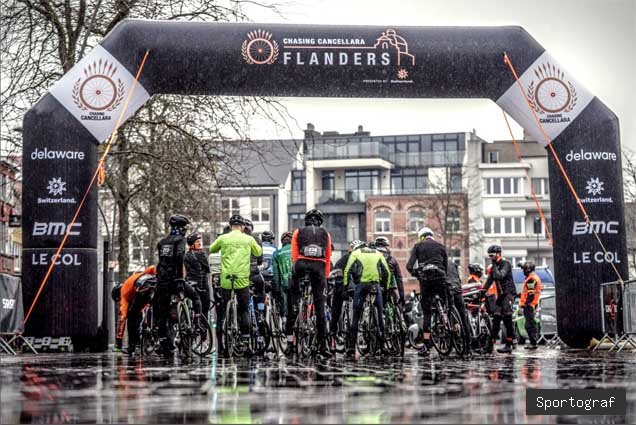 Also on the Oude Kwaremont we repeat this, only I notice that Arthur doesn't drop me this time. I take the lead. Ahead of us a car from the organization drives with a cameraman out of the tailgate. I'm not going to give up and be in full view! I ask Arthur politely if he still intends to take over. He does, but then falls silent and I too am still in the picture. I hope that the cameraman pulls away, that Arthur will jump away hard after all, or "something". That something came! At the houses of Kwaremont the course does not go straight, but turns left towards Rampe. Ouch! Now I was 2nd, he 3rd.

On the way to Rampe, a Swiss punctured (not Fabian himself). He had a flat on the cobblestones and no pump with him. I had a pump and could secretly use the rest too. As a result, I lost Arthur's wheel and rode alone to the Pater.

The final verdict is that the weather was a spoilsport. That the organization is really very good. Personal: an 8th place overall and 4th in my category. I would have signed for that in advance, top 10 in a "semi-gran fondo"! Cancellara was 13th... He should participate next year in Chasing Wouter ... I'm definitely going again!

Do you prefer a bigger chance of better weather? Then take a look at the other fondos where you can chase Fabian. There are three Chasing Cancellara's in Switzerland and one in Liechtenstein!