The Drenthe 200 is a 200 km ultra marathon across the Dutch province of Drenthe. The route consists of several MTB trails interspersed with meadows, gravel sections, forest roads and lots of mud. Those who participated in the 2017 edition know: 'Never do this again!'

It wasn't as bad as in 2017, but the amount of rain in the week before Christmas made it seem that way. Fortunately, the weather cleared up somewhat over the Christmas weekend and so on December 28 I found myself at the start of this MTB marathon through Drenthe for the third time. Even before the start I had a chattering foot to deal with, as my visit to the mobile toilet was accompanied by a step in soggy grass. A nice start, but well, the feet would get wet anyway. The rain came down in buckets when the starting gun fell at 6:00.

Full gas from the start

The start was divided into waves of about four hundred riders, each shot ten minutes apart. I myself was in the race section, the first starting wave. As usual the start was hard, in all waves the strong riders immediately want to make the difference. The first kilometers are still on asphalt, but once at Langelo you dive into the woods. Because there was quite a bit of headwind, the entire peloton was immediately broken up and groups formed everywhere. I soon ended up in a nice group where there was excellent cooperation. The guys on the CX bikes took care of the asphalt sections and the mountain bikers took took the lead in the heavy mud sections. Despite the rain, the first section was in pretty good shape. Lots of mud, but not impossible. After an hour and a half I reached, still in the dark, the first post at Balloo. I had decided beforehand to skip posts 1 and 3 and quickly fill the water bottles with water and SIS at the second post and halfway through. My strategy: ride on at a high pace, but not over the max. By getting 90 grams of carbohydrates per hour from drinks and gels, I was able to cycle for three hours each time before I had to refuel. Full-service trip according to the Live like a pro concept. Includes starting ticket. Full options!

The organization had done an excellent job with the feed stations again. There were volunteers everywhere with a varied supply of food, sports drinks, water and even hot pancakes. If you want to ride the 200 km quietly, there is plenty of room to take your time, if you want to compete for the top 100, you will be helped quickly in the beautiful barns.

A wonderful moment during the race is always the sunrise. I found myself all alone on the Gieten hump as the sun slowly rose. The advantage of starting at the front. The first 100 kilometers were manageable, but after that it got tougher and tougher. On the stretch up to the last care station in Veenhuizen, my strength was put to quite a test by mud, a sucking surface and a hump with a gradient of over 18%. Fortunately, there I was able to sit in the wheel of two men on CX bikes. One of those two turned out to have come to Roden the night before with Laurens ten Dam. Apparently he didn't know then what to expect, because he cursed Ten Dam repeatedly during the ride. Ten Dam incidentally rode to a creditable third place, behind winner and Dutch champion Tim Smeenge and Bas Peters (p2). Full results can be found here. We have a limited number of tickets with 50% off. The regular price is €54, with us you only pay €27. You're buying a coupon code which you can use to sign up free of costs.

The code can be used for both gran fond and medio fondo.

This is a limited offer, so don't wait too long.

More about this offer

I can be brief about the last part of the route: beastly! It took me almost two hours to cover the last 30 km. The culprit: the Janpad. An impassable stretch of mud for several kilometers. The "Welcome to Hell" sign that was there in 2017 wasn't there this year (or I missed it), but certainly wouldn't have been out of place. Bike, walk, bike, walk and above all don't fall. As so often with this type of tour, you register the smallest details during the race. That one little path, that back wheel, that bit of flowtrack. It makes the hardships of the mud, rain and cold bearable, so that after the finish line you can make a coherent story of all the wonderful things you experienced, from the enormous suffering to the small moments of happiness. Such at the Drenthe 200, where everyone is personally welcomed on the podium and the family is already waiting. In cooperation with Velodroom Roden the organization had arranged a beautiful indoor location where you could relax and where strong stories were exchanged. For myself, those stories ran out for a while. I had given the maximum and got pretty cold. What prevailed was a feeling of pride. Out of more than 1,100 participants I had finished in 106th place.

The Drenthe 200 is a real challenge and belongs on the bucket list of every cyclist who wants to make a foray into mountain biking or CX in the winter. In good conditions it is enjoyable, in mud or bad weather it is heroic. The organization is top notch. The route is well plotted and shows you all the beauty that Drenthe has to offer. Registration for the 2023 edition is possible from May 1. Then again a frozen course? 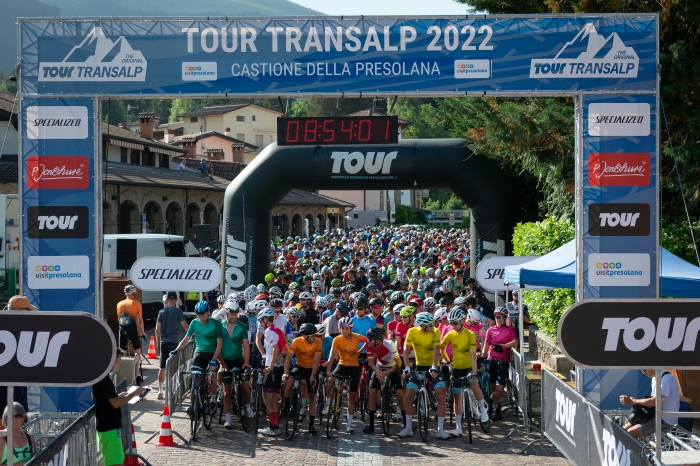 TOUR Transalp stage 5 and 6: (touching the) the podium