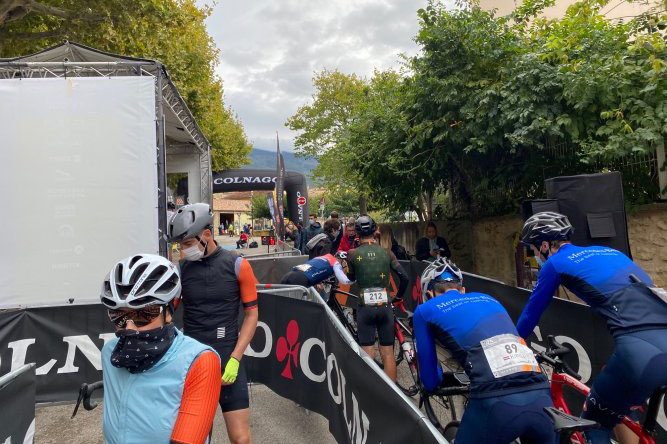 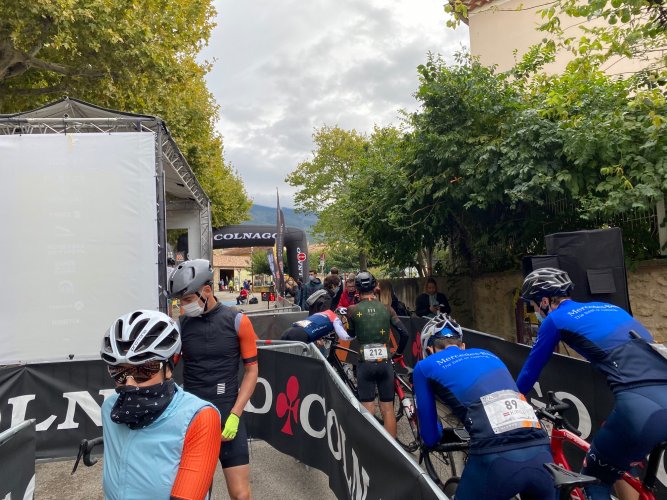 The organization of the Haute Route can arrange a lot, but dry weather, for that you need some luck. And today was the day. During the individual time trial the riders would start in reverse order; the lowest ranked riders will go first. Herman and myself are however registered as a duo, and they come just after the individuals, and just before the top riders. So one thing was certain, we would be overtaken and maybe even finish last. Especially because we also wanted to shoot some photo and video material along the way. The start itself is quite an event, complete with a pro-like sloping time trail stage.

We ride together and set ourselves the goal that Frederic is not allowed to overtake us before the notorious forest. And we succeed, although it's very close. We stop for a moment to shoot some footage:

Not much later the leader in the race Loïc Ruffaut passes by and I can't resist to see how many watts I have to push to keep up with him. You can see the result below.

Herman and I continue to climb together through the endless forest. Nine km of misery, that's a pretty accurate summary. And now even the broom wagon is behind us. We had seen that coming, although we're riding a steady pace. Fortunately, it doesn't take long before we overtake up a few people and the broom wagon is gone again. Great. And not far from the top, the Tête de la Course car even drives in front of us (the fast guys are already finished). But not much later it turns out that the riders we caught up with have given up and so at a certain moment we drive between the broom wagon and the Tête de la Course car. A unique situation. After a hero's welcome on the foggy and cold top, we drink something warm, get dressed and drive back to our hotel.

It was another day to remember. Congratulations to both gentlemen with their great performance! CycloWorld will come this week with a review in which we will go a little deeper into the concept of the Haute Route events and how we experienced it. Don't forget to read our report of stage 1 and stage 2. GeMSe: more than just a challenge