The rhythmic sounds of Kraftwerk's classic suddenly pop into my head as I fly at over 50 kilometers per hour into the final 5 kilometers of the Škoda Velotour, the "Jedermann" (every man) version of Der Radklassiker Eschborn-Frankfurt. But where there is an image among many that Eschborn-Frankfurt is a flat gran fondo, that image needs to be adjusted. The Main river, the Weites Tal, continually lingers on the horizon, but the course is anything but flat! Because with 20 flat opening kilometers and the last 10 mostly downhill, 70 remain to overcome nearly 1,600m+! Großer Feldberg, Ruppertshainer and Mammolshainer are the sharpshooters on duty. Not climbs that are high on the bucket list of most cycling enthusiasts. But calves and quadriceps are on fire at gradients as high as 20%. Even though May 1 is a German holiday, Tag der Arbeit, the 6,200 participants at the start mean they have to work hard.

At the invitation of the organizers, since 2017 in the hands of the A.S.O., CycloWorld was on hand at one of Germany's biggest cycling festivals. And a celebration it certainly was. After the cancellation in 2020 and the rescheduled edition in 2021, Eschborn, Frankfurt and the Taunus have, as organization president Matthias Pietsch fetchingly put it, "Wieder Tierische Lust auf das Rennen." There was therefore again a full two-day program with kids race, youth races, a cycling exhibition, the World Tour race of the pros and the Jedermannrennen: the Škoda Velotour. Add to that the hospitality of the locals, the abundant and enthusiastic public, the perfect and gründliche organization with closed and good roads and you have a cycling party pur sang. 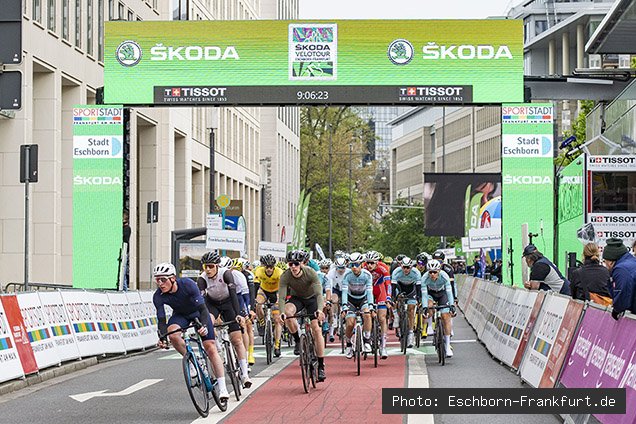 So basically it's a race?

CycloWorld had the opportunity to briefly speak to Jasper Philipsen, winner in 2021, and John Degenkolb, Lokalmatador and winner in 2011. We asked them what they think of the Jedermann (gran fondo) concept.

CW: Jasper, as a Belgian, isn't it a shame that Belgium has (almost) no real gran fondo like Eschborn-Frankfurt here?

JP: But the Tour of Flanders also has a GF, right? Aha, so that's a sportive. So a gran fondo is actually a real race? Nice! Then it is a pity that there is no real Jedermannrennen in Belgium and the Netherlands as they know it here in Eschborn. Good that this is linked to the professional race. This gives a nice boost to the sport of cycling and attracts extra public to our race. It would be nice if one of the big classics in Belgium embraced the concept of the gran fondo.

CW: As a local rider, what do you think about the fact that Eschborn-Frankfurt is seen as a sprint race and doesn't that give the wrong image to the amateur cyclists?

JD: Eschborn-Frankfurt is certainly not a sprint race for us pros with its 2,600. For the participants of the Jedermannrennen, it is a tough task. But above all, it is a great opportunity to ride the same course and measure up. And don't forget the atmosphere along the course due to the Hiemlische Fans which make it one of the most beautiful cycling days in Germany.

Jasper Philipsen and John Degenkolb finished 11e and 22e respectively in the race won by Sam Bennet in the 2022 edition.

Back to the Škoda Velotour. As we've come to expect with most fondos, it's a ball game right from the start. Like an arrow from a bow we shoot away with Startblock Eins. The first few kilometers are slightly downhill towards the inner city of Frankfurt. At 50, 60 kilometers per hour, the colorful bunch finds its way between the skyscrapers of the financial heart of Europe. With such a swarm of riders, a crash is never far away and there are a number of crashes. It takes until Oberursel, at the foot of the Großer Feldberg, for things to calm down and for everyone to find their own pace on the over 15 km long climb. The advantage for me, as a non-climber, is that I start with the first 150 on the climb. Own pace, occasionally joining a group and not chasing myself over the head. The TISSOT Bergwertung I let pass. The asphalt is in perfect condition and my reward for slogging uphill is the fantastic and very fast descent. Completely free road, perfect tarmac, not too many curves and now and then a small slope bring me, in a small group, quickly to the Ruppertshainer. With 17% it's a mean calf-biter of 1.3 kilometers. 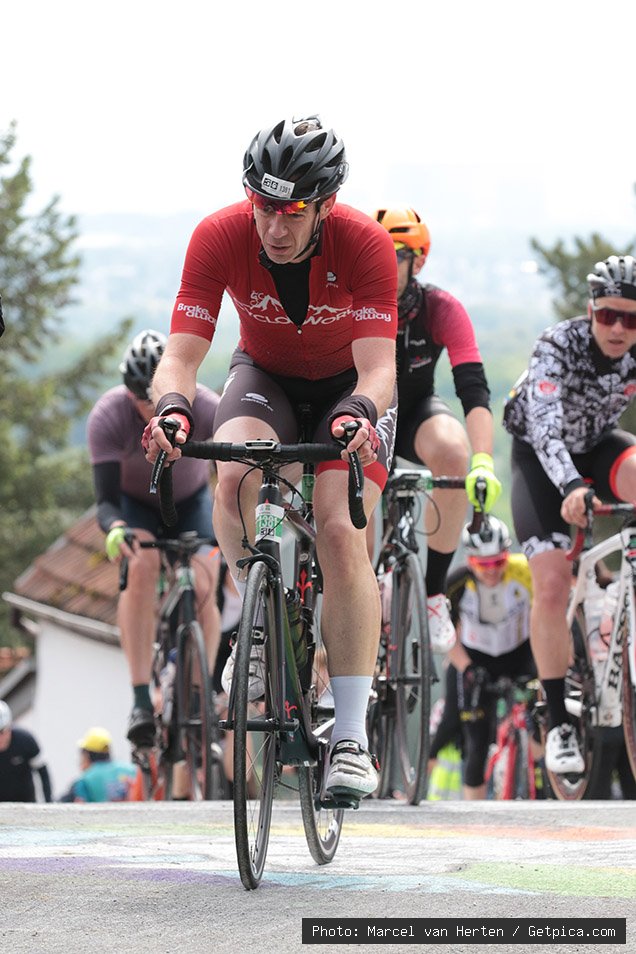 In the next kilometers, a few bursts in the landscape go downhill to the last slope of the day: Mammolshainer. I notice from my fellow riders that everyone is a bit apprehensive about the last obstacle in the course: 3 kilometers of climbing with an average of 8.6%. The first 3 km of the climb begin quietly, then continue to climb at around 10% and after more than 1 km turn right into the Am Steinbruch: 150 meters at an average of 17% and a maximum of 22%. Dieter, Didi, Senft shouts everyone up and the enthusiastic crowd provides the final push. From the reconnaissance the day before the race I know that there are still 1.5 kilometers to go with an incline of 6 to 8%. That sucks the last bit of juice out of your legs. Fortunately, it is only 10 km to the finish. The four-lane urban freeway, Kraftwerk starts to sing, an exit to the right ... I can't resist ... just sprint to the limit and squeeze out the last 1,214 watts. Finished!

Curious about the official race report of the Škoda Velotour? Then click here.

Was it a successful trip to Frankfurt and the surrounding area? YES!
Is Eschborn-Frankfurt recommended if you want to ride a cyclo close to home? YES!
Will we come back to Škoda Velotour and the Taunus again? CONFIDENTIALLY!

Handy fact: The start and finish of the Škoda Velotour is in an area with many hotels and plenty of facilities. Through one of our features on CycloWorld, I found a hotel quickly and easily through Booking.com: Leonardo Hotel. And because the hotels here are often largely empty in the weekend, I got a good rate.

So if you're looking for a place to stay on your next cycling trip, be sure to check out your event via the CycloWorld calendar . 5 events for next weekend Skoda Velotour: a top notch gran fondo. You can ride it for free.