The highlights of La Vuelta for gran fondo fans

"No pasa nada", shouted event organizer Unipublic in December when the announced presentation of the La Vuelta 2023 was moved to January 10. Race director Javier Guillén kicked it up a notch by proclaiming that 2023 would be the most spectacular edition ever. And indeed, there was nothing wrong. And indeed...the wait was rewarded with a great course with yet another new mountain arrivals, old acquaintances, exciting finales and beautiful cities. Now let's hope Guillén's words come true in September. But what's in store for the fanatic gran fondo riders? Time for part 3 of the triptych: What are you looking forward to in the Grand Tours as a GF rider? The Giro and Tour already laid down plenty of highlights that are worthy of praise. So naturally, following in the footsteps of parent company ASO, Unipublic couldn't stay behind. Check here the trailer and the route on La Vuelta's site.

Both the Vuelta and gran fondo nation Spain are often seen as the "little one" anyway. But on closer inspection, they turn out to be a real revelation. To reinforce that, we once again list six highlights for the granfondo lover. Venga Venga!

#1 Kickoff in Catalonia with a touch of Andorra

Basque Country is the Flanders of Spain when it comes to racing. Catalonia, then, is perhaps the region in Spain with the most opportunities when it comes to cycling itself. Whether on a road bike, MTB or gravel bike. Flat, hills or high mountains, Catalonia has it all. And in the first days of the Vuelta, we are presented with all that beauty as a tapa. A little bit of everything and mainly intended to ensure that we can continue for a while until the main meal that will be served later. All this preceded with a team time trial in Barcelona as an amuse. So the men of the classification will have to get going from day 1. If you're a GF rider looking to get going, Catalonia is a candy store with Girona as the absolute cycling hotspot. For the cool gran fondos you will have to look mainly in the Pyrenees and neighboring Andorra. The Mussara Reus, Haute Route Pyrenees and 3Nacions give a nod to the Vuelta's route schedule in 2023. Curious about the 3Nacions? Then read the report by our Spain administrators Pieter and Nicolien. #2 To the winter residences of the pros

The Costa Blanca, Calida, Almeria and del Sol with places like Dénia, Calpe Benidorm and Málaga are popular resorts in winter and early spring. Not only for our seniors but certainly also for many cycling fanatics. The pros have their regular wintering spots there and also the kickoff of the season takes place partly in these regions with Ruta del Sol and the Murcia and Almería tours. The Vuelta often manages to find the popular coastal region with its hilly and mountainous interior. So again in 2023. Even with three stages. 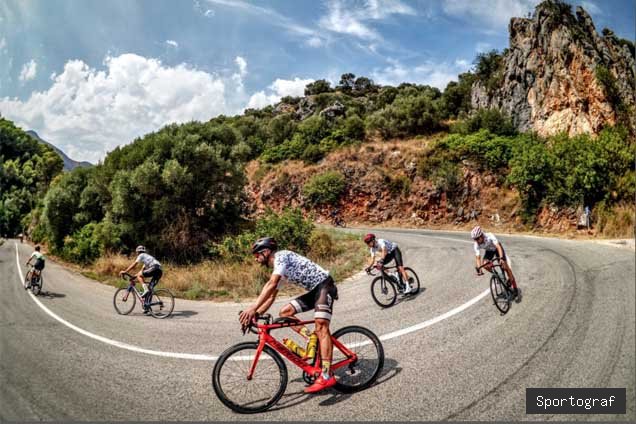 La meta is drawn in stage 7 in Olivia, which is also start and finish location of the Gran Fondo Alberto Contador. This gran fondo does pass through the region of stage 8 with the famous Coll de Rates in the route. CycloWorld was there last season, read the report here. Stage 8 starts from Dénia, which served as the battleground of the Zwift Academy just last December. Here we saw Luca Vergallito, previously winner of GFNY Championships, GF Tre Valli Varesine and GF Coppi, win the coveted pro contract with Alpecin-Deceuninck. Dénia is home town of the Ciclodeportiva La Gamba. On April 2, a nice finale to a training stage in the warm Spanish sun. Interesting, however, is also the arrival of stage 8 on the Alto de Caravaca de la Cruz. Part of the climb has been part of the course of Marcha Ciclodeportiva Sierras de Moratalla in the past. The exact route of the May 21, 2023 edition is not yet known. But you can be sure that you will ride parts of the Vuelta course. Buy a discount code for €10 through CycloWorld, use it at registration and get €35 off!

#3 - On the classic tour in the Pyrenees - La Segunda Parte

"Mountains are part of the DNA of the Vuelta" said Javier Guillén at the presentation on Jan. 10. Not a word of that is a lie. If we follow Guillén's analogy, the Pyrenees will be the first strand of the DNA double helix in 2023. After the first 12 stages were anything but flat, it will be all hands on deck in the mountains from stage 13 onwards. Photo: the Tourmalet is in both the Tour and the Vuelta this year.

La Vuelta then, following the Tour de France, also goes on the classic tour: la Segunda Parte (ed. part #2) shall we say. With a passage over the Aubisque and the Spandelles and arrival on the Tourmalet it is arguably the queen stage. The Tourmalet is popular in the Grand Tours this year anyway. It's in the Tour, is finishing place in the queen stage of the Tour de France Femmes and so is the Vuelta. The day after, the peloton largely follows the route of the Granfondo Larra Larrau with the Puerta de Larrau and the final climb to the ski resort Larra Belagua. A very big compliment to the 30-year-old organization of the Larra Larrau, which does have to look for a new date as a result. JOIN Cycling is the #1 app for your smart, flexible and personal training schedule. Exclusively for CycloWorld readers, we have a unique offer. An extended free trial period! This will introduce you to 28 days of dynamic training schedules that adapt to your personal profile, training history, progress, training goal and busy life.

The Pyrenees are and remain unprecedentedly popular in the gran fondo world, with a two-country route often being chosen. Some well-known gran fondos near the route of stages 13 and 14 are: Haute Route Pyrenees, Marmotte GranFondo Pyrénées, GFNY Lourdes Tourmalet and of course the immensely popular Quebrantahuesos.

#4 - In the footsteps of Indurain

Stage 15 is one with a royal touch. Not only are we in the old kingdom, and now one of the autonomous regions of Spain, Navarra. But above all, we are racing through the training grounds of El Rey himself: Miguel Indurain. One of Spain's greatest cycling heroes. Credit where credit is due. So in addition to a professional race (GP Miguel Indurain), Indurain also has his own (semi-)gran fondo, La Indurain. Where, by the way, he himself makes an appearance every year. #5 - Mystical or foggy triptych in the Cantabrian Mountains?

The Cordillera Cantábrica (the Cantabrian Mountains) definitely forms the second helix strand of the Vuelta DNA, in the words of race boss Guillén. In many editions of the Vuelta, the classification was put into its final fold here, in Asturias in particular. That happened on the mythical and usually foggy flanks of the Alto de l'Angliru, Alto de Lagos de Covadonga, Picón Blanco or one of the many other climbs of Parque Nacional de Los Picos de Europa. CycloWorld explored this beautiful cycling area last September during the 2022 Vuelta. Read all the interesting facts about one of our favorite cycling regions.

Back to the course and the gran fondos. The course builders have laid out another wonderful triptych from east to west. The first stage, #16, is still fairly civilized with arrival halfway up the gruesome Salto de la Cabra, in Bejes. In stage 17, that's when it comes. After two 1st category cols, the riders "only" await the finish after 109 km on the Alto de l'Angliru (check CycloWorld's reconnaissance). The infamous passage of Cueña les Cabres (the goat trail) will certainly separate the wheat from the chaff. As if this were not enough, a dessert of five cols awaits the following day, with the final climb to Puerto de La Cruz de Linares even being ridden twice. Photo: Alto de l'Angliru is known as the toughest climb in professional cycling.

It is only natural that in an area so dotted with beautiful roads, climbs and accompanying vistas, there should be beautiful gran fondos to be found. And there are those with Desafio el Acebo, Marcha las Hoces and the popular Desafio Lagos de Covadonga with arrival at the Alto de Lagos de Covadonga. Together, the Gran Fondo Canta Brica, Gran Fondo Tineo, Clasica Bajo Nalon and Gran Fondo Oscos make up the Asturia Challenge. A series of four gran fondos with a prologue over a fully enclosed course of about 3 km on Saturday and the GF of about 120 km and 2,500m+ on Sunday.

However, the gran fondos avoid the horribly steep climbs. The reason is logical: a large number of climbs only go uphill, have poor road surface (on one side) or it is simply not sensible from a safety point of view for participants to ride the steep roads. But if you're there for a nice gran fondo, tick off those bucket list climbs. Or the other way around, of course!

When you start stumbling across places with royal touches, like del Real or del Rey, you know Madrid is not far off. In recent years, the Vuelta's course builders have chosen to create an apotheosis in the final days in the mountains surrounding the Spanish capital. In 2023, it will be the turn of the Sierra de Guadarrama. With as many as ten third-category climbs, 208 km, 4000m+, lots of winding and up-and-down, it could be another interesting Saturday on Sept. 16. Especially if the time differences are not very big.

Both the gran fondos Desafío Puertos de Guadarrama and La Perico cross the Sierra de Guadarrama and ride parts of the route of stage 20. La Perico owes its name, of course, to Pedro Delgado. Alongside Indurain and Contador, he too has his own gran fondo. Fun fact: every year a tribute is given to a different Spanish former rider. This year it is Joaquim, Purito, Rodriguez. Who in turn has his own gran fondo in Andorra: La Purito (and again takes care of parts of the route of stage 3). Then there is still the long arm of the ASO visible here as well: L'Etape Madrid. From one of Madrid's suburbs, the southern foothills of the Sierra de Guadarrama are addressed. Nice bonus of the three gran fondos is the mostly beautiful and dry weather in this area and of course the possibility to make another city trip to stately Madrid. And what about the two-day stage race Madrid 7 Picos? With this, you'll end your season in magnificent fashion on 7 and 8 October.

La Vuelta was the final part of the three-part series on the Grand Tours. Not to worry the first hints about the 2024 eidities have already been lifted, we look forward to October 2023 when the routes will be announced. Until then, Vai vai! Allez allez! Or perhaps Venga venga! But above all, enjoy the course and enjoy cycling, plenty of choice! These countries will host the next UCI Gran Fondo Worlds Another 8 apps for the gran fondo rider