The Giro d'Italia 2022 has been in full swing for more than 1 week now and the beautiful images make one yearn for the upcoming summer holiday period. For many, "La Bella Italia" is a favorite vacation destination, also with a bike! Enjoying the victory of Koen Bouwman in stage 7 I start to muse again about that other piece of the Apennines about 500 kilometers north: the region around Pergola / Cagli. Unknown to many cyclists, but therefore not less beautiful.

Returning back in time for a moment. We write Monday, May 25, 2009. Stage 16 of the centenary Corsa Rosa, and that year's absolute queen stage, is about to begin. It's hot in Le Marche that day, Denis Menchov in pink (who remembers him?) and a ridiculously tough stage awaits the riders: over 6,200m+ over 237 km. Start in Pergola and finish on Monte Petrano near Cagli (check here the broadcast / photos). After 140 km the party really starts and 95 km remain with 3 monti and over 3,200m+. CycloWorld rode these unknown climbs in 2021 and we can already tell you: recommend it! 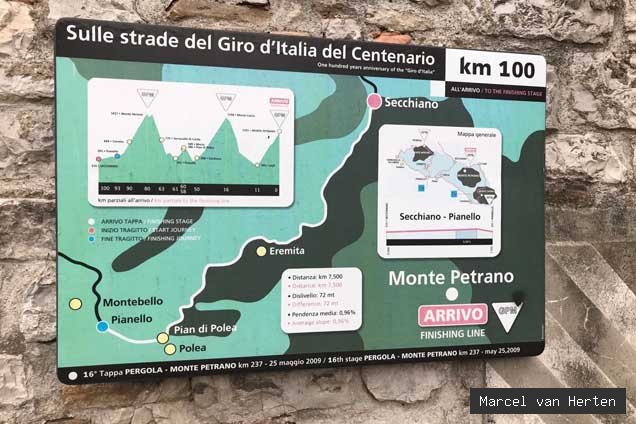 Not only because of the Giro, but also because of an article in the magazine Fiets #1-2010, the first of the 3 monti is perhaps the most famous or the least unknown (?). We follow the route of the stage and ride up Monte Nerone from Pianello. Locally, because of its many hairpin bends, this side is also called the Alpe d'Huez of Le Marche. In terms of altitude (1,179m+) and length (16.7 km), the Nerone is certainly not inferior to the Alpe. But in terms of road surface ... pfff. The asphalt shows serious wear, especially the first few kilometers. In combination with the width of the road (generally not wider than 2 to 3 meters) makes this side is not suitable for descending. But because of that it is wonderfully quiet. Apart from two cows, a horse and three local farmers repairing a fence I encounter no one during the more than one hour climb. The gradients are not terrifying but fluctuate continuously around 8 to 10%, which makes the climb nicely even. After 13 kilometers there is a short flat part of about 2 kilometers with a stop at the Monumento del Centenario (as a reminder of the 100-year Giro d'Italia). 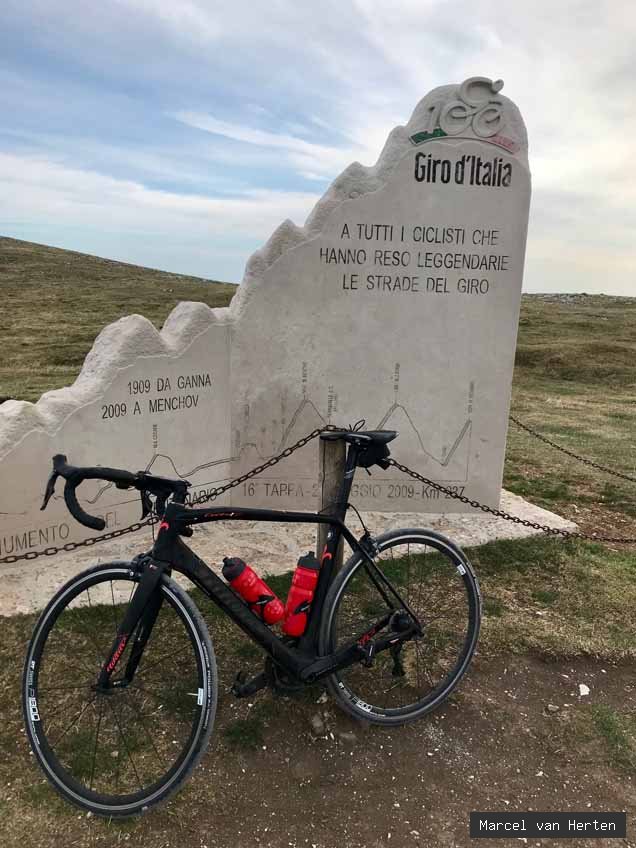 As the road starts to climb again, we approach the highest point of the Giro course, near the Rifugio La Cupa. The restaurant at the intersection of the three roads to the summit has a tasty menu, but it only opens at 12:00, so for the early birds also not just fill the water bottle unfortunately. To reach the official summit the road, just before the descent to Serravalle di Carda, goes steeply to the right for a few hundred meters and then ends against the gate of the radio mast of RAI at 1.508 meters. 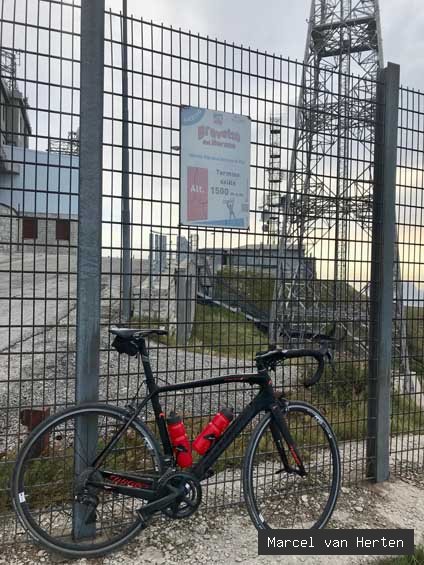 Photo: the summit of Monte Nerone.

Monte Nerone has three climbs. The most famous from Pianello, the toughest (expressed in climb points) from Piobbico and finally a relatively short variant from Serravalle di Carda. Fun challenge? Do you climb all three in a day then you may pick up the Brevetto del Nerone after an established route of 103km and 3,500+m. 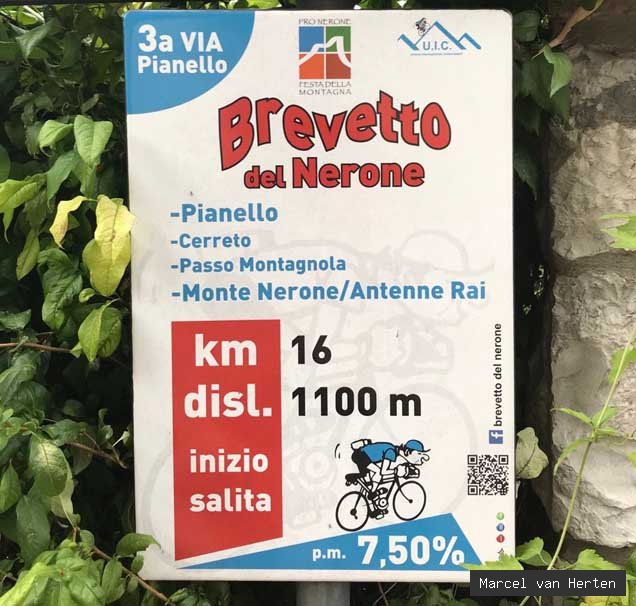 Photo: the 3 climbs of the Nerone are indicated with info signs.

A long descent and a dirty, nasty hop over the Moria takes you to Chiaserna at the foot of Monte Catria. Through the provincial road Sp50 you turn left at Pizzeria Cactus. A large yellow sign Monte Catria indicates that you are in the right place. From here the road begins to climb false flat. At the end of the village, the road winds through the last houses, trees and rocks. The asphalt here is also in poor condition, but good to ride uphill. Fortunately, work is being done on the road surface, although the detour raises eyebrows. 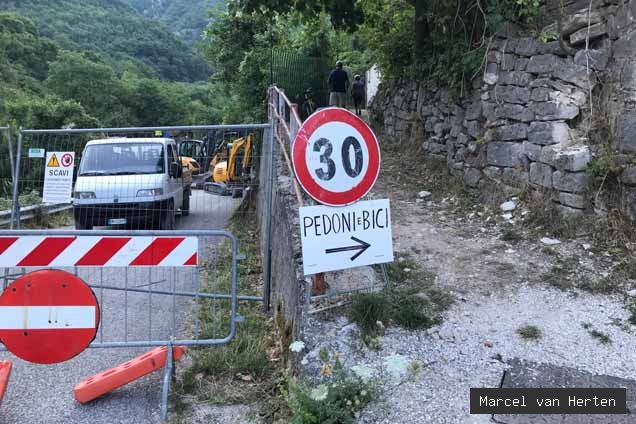 Through the, in the morning fresh smelling, forest you climb the first kilometers steadily at percentages around 8 to 9%, to flatten out after 5 kilometers. The last 2 kilometers are in the double digits, but you will be rewarded with beautiful views of the Alte Marche at 1,366 meters altitude. The top of Monte Catria (1,701m), and the adjacent Monte Acuto (1,669m), are easily accessible with a gravel bike or MTB via an unpaved mountain path. For the road bike not to do. That gravel bike or MTB is perhaps also a good alternative for the descent to Buonconsiglio. Immediately after the top, the road surface changes to the sterrato (roads of fine gravel) known in these regions and you descend along and over the slopes of a small ski area. The descent is not steeper than 5 to 6 percent, but because of the increasing speed you have to be careful. 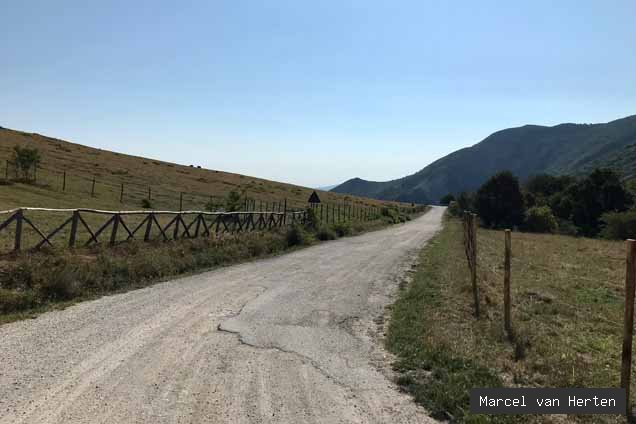 Picture: the descent of Monte Catria, partly over sterrato.

Specially if you consider that in this region it is not unusual to come face to face with a deer, fox, wild boar or even porcupine. After more than 5 kilometers the tarmac returns and you descend on good (in parts even new) tarmac for almost 10 kilometers. The road is super curvy and occasionally seriously steep (up to max. 20%), so this side is definitely recommended to climb. 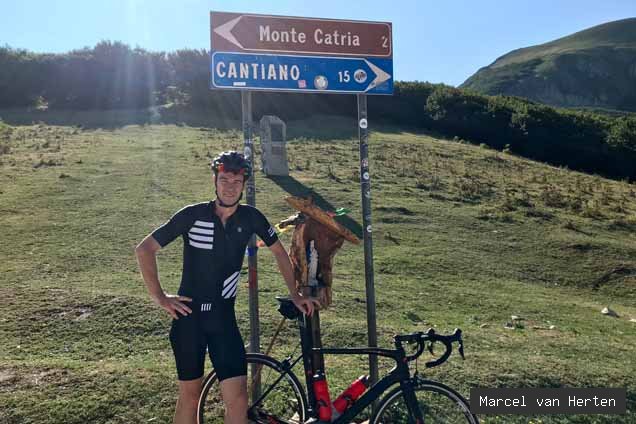 Photo: Monte Catria another 2 km, on the MTB that is.

From Monte Catria you dive over the provincial road Sp42 and Sp424 into Cagli. It is definitely worthwhile to cycle through the historical center of Cagli. Once you've passed the Torrione Martiniano (a remnant of the old city wall) the road turns right to the left with immediately a short steep section of well above 15%; the climb to the Monte Petrano has begun. 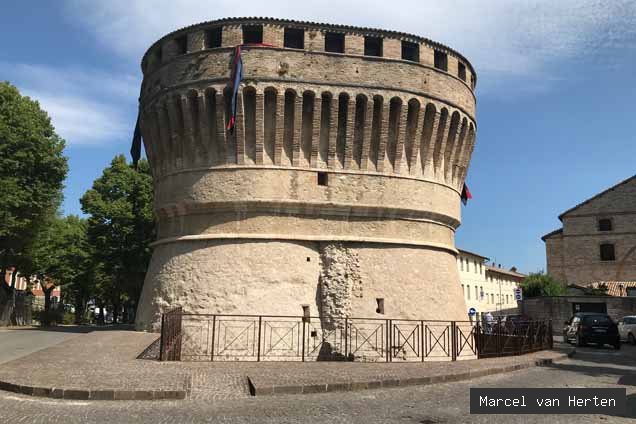 Photo: Torrione Martiniano in Cagli marks the start of the climb to Monte Petrano.

Also here a sign confirms the start of the climb. The road surface here is more than fine which makes the climb feel a lot easier. But nothing is further from the truth, although less heavy than Monte Nerone and Monte Catria, the climb is certainly not inferior. Because of its location on the north side you cycle fortunately largely in the shade of mountain and forest, but that does not make you sweat any less. The percentages remain well above 8-9%. In kilometer 6 follows a series of hairpins with stunning views of Monte Nerone. After the 5th hairpin, the climb peaks again at 12-13%. Fortunately the last kilometers flatten out a bit. 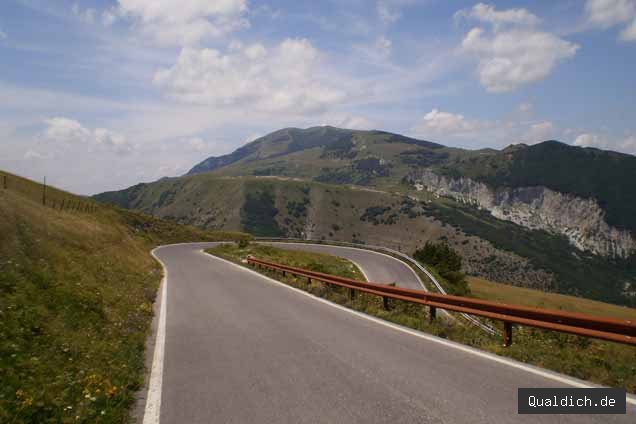 A sign sprint at the sign marking the summit invites then. A monument to the crashed Michelle Scarponi (rider of the region) and all cyclists who lost their lives marks the finish line of the epic stage from the 16th. Here, fortunately, there is a rifugio and small grill bar that are open and also a mini-camping site. The Petrona also has a south face, but this one is only climbable with a gravel bike or MTB because of the very bad condition of the road surface. 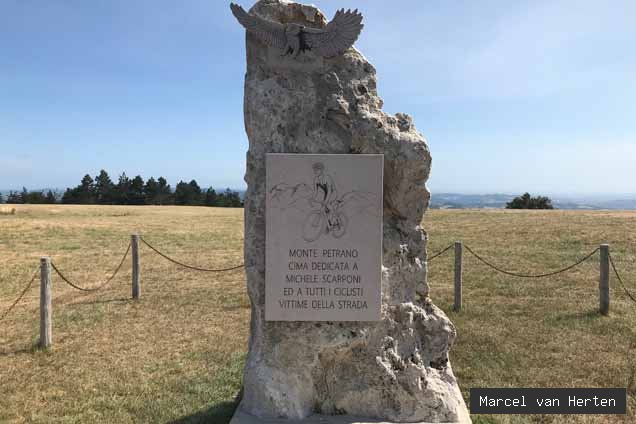 Photo: the monument to Michelle Scarponi at the summit.

After three monti, it's great to relax on the top of Monte Petrano or after a nice fast descent in one of the coffee bars along the Viale della Vittoria in Cagli. While enjoying a Birra Moretti or Peroni (depending on which camp you are in the Italian beer battle) time to check the dates and share some tips: 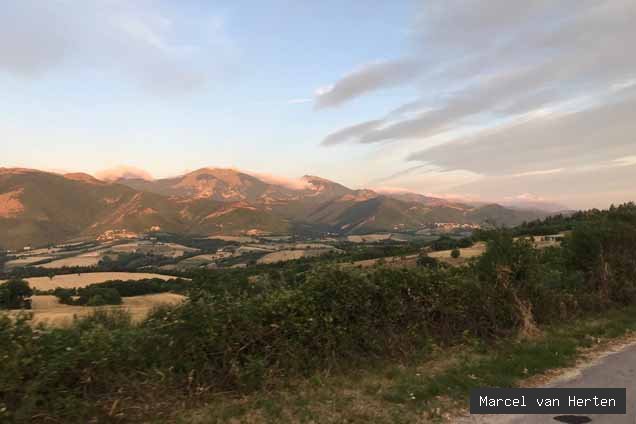