World Championships Gravel: the experience of a lifetime

Saturday, Oct. 8, 2022. I am at the start of the World Gravel Championships in Vicenza. The women Elite start at noon and we, the qualifiers in the different age categories, start 20 minutes later. In our starting pen, it's first come, first serve and since I have absolutely no idea what to expect today, I decide that at least being at the front gives me mental peace. For about an hour I absorb the atmosphere and the bright sun. Around me are mainly Italians, Americans, Australians and an occasional Swede and Filipino. Plus the other three Dutch women competing in their age groups for the world championships. The nationalities present reflect where the qualifying races took place. Photo: no stress at the start.

For myself, it was three weeks earlier in Veenhuizen (Drenthe, the Netherlands). My first gravel race in what is almost my backyard. Just to see if I like racing on my gravel bike was my thought. And it was fun! Beforehand I hadn't been thinking about the World Championships, but I came second and thus qualified. Suddenly I had to organize days off, transportation, lodging, apparel, bike check and a license in two weeks.

Back to Vicenza. The organization designed a 140 km route with just under 500 meters of climbing for us. The climbing is mostly done in two tough climbs in the first fifteen kilometers. Both paved and unpaved and with percentages up to 13%. The accompanying descents are at least as tough because the first runs along a narrow unpaved path full of hairpin turns and the second over steep, winding and lousy asphalt. This is followed by kilometers of winding trails with a beautiful alternation of gravel, singletracks and forest roads. With enough rocks and stones to be happy with those wide tubeless tires. I myself have the misfortune of being overtaken on the second descent in a turn by a motorcycle of the organization. I am no hero on this descent, but a slight fright due to the, otherwise decent, overtaking does my speed no good. In front of me I see a group being formed and I chase for at least ten kilometers to join them. The most technical part of the route is over and I decide not to take the lead for the first half hour and assess how the rest of the group is doing. That seems to be a bit variable. The Swedish lady is doing a lot of work in the lead and the Filipino is fiercely guarding her tail position. Also riding in this group are an Italian, a German and two Australian women. One of the Australians is riding in the same category as me. 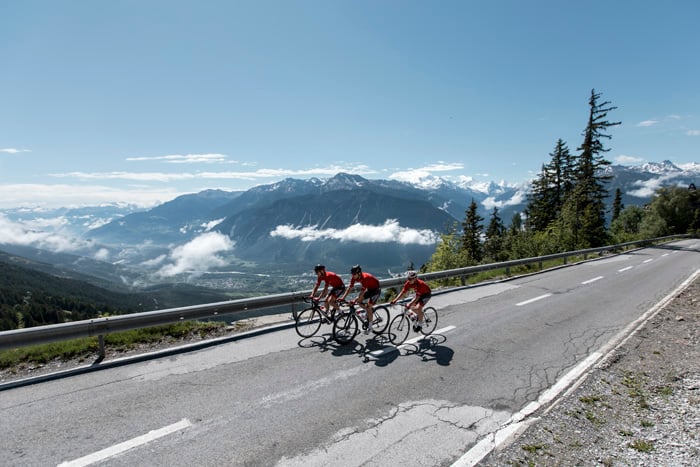 And never miss a thing.

You have successfully joined our subscriber list. Don't worry, it's absolutely free.

We have been riding together for a while when a signalman indicates last minute that we should enter not the roundabout but the small path just before it. The Swedish rides up front and gives a tug on her handlebars. There is no escape for the German in her wheel, she hits it full on and crashes solidly. Third in line, I see myself ending up on top. But braking, steering and clipping out make that I "only" touch her bike full on and catch myself on my left leg. In the process my handlebars land hard in my standing leg, but I am not lying and can continue. Unfortunately, we did not see the German again.

Except for the Filipino we are working together nicely. The course also makes that easy. It is mostly gravel with occasional dirt or singletrack and regular stretches of asphalt. The other women in the group have helpers who pass water bottles. That is a luxury I miss. At some point my bottles are almost empty and for a moment I am jealous of the Italian woman who gets a bottle of water from a fellow countryman on a racing bike. It is outside the official "feed zones" and not allowed so I accept my dry throat. The Swedish is friendly enough to let me take a few sips from her water bottle. At the next water station I get off to fill my water bottle. The organization hands out bottles of water. With the cap still on. Totally clumsy, I stand with my water bottle in one hand and its cap in my other to open that bottle. And the next one. It finally works and once again I can hunt for the group. Photo: Pauline Ferrand-Prévot (FR), who would be the winner among the elites. © Sportograf

The pace in the group could be faster for my taste. However, one of the other women has heard from a helper that the gap to the front is considerable. As a result, I decide that riding solo would make the chances of a chasse patate very high and I would be better off taking advantage of the group. And so we ride together into Cittadella. Sucker that I am, I don't have the last stretch before the finish in my head. A few hundred meters before the finish, just before the city wall, I leave the lead. Turns out we are going to meander along the wall some more at the bottom. The order of the group is decided there and as penultimate I turn onto the last 100 meters to the finish. Chance-less for a final sprint I still turn on. With in the back of my mind the idea that most of my competitors have already finished. A second behind the Australian I cross the finish line. Some minutes later, my mother sends me an app that I finished sixth. Ten minutes behind the number three: Judith van Maanen. Great that she made it to the podium! I know an acceleration wouldn't have gotten me a podium spot, but the gap certainly could have been smaller. And a note to self for a next race: if you don't know where your competition is riding, pretend you're riding in front. Apart from that, it was a great experience to ride the first World Gravel Championship. Never dreamed to participate in a World Cup in anything ever in my life. Something to enjoy for a long time. Where the gran fondo stops